The Members of the Rais~A~Ruckus Pro~Staff and Junior Pro~Staff Hunt Teams
PATH TO PROSTAFF
What makes a "prostaff" member?
Tim has specific ideals and characteristics he looks for in choosing his prostaff members, Following is Tim's "path to prostaff". Feel free to contact us if you feel that you may qualify and if there is room, we would love to have you!
Senior Pro Staff Members;
Jeff Guidry 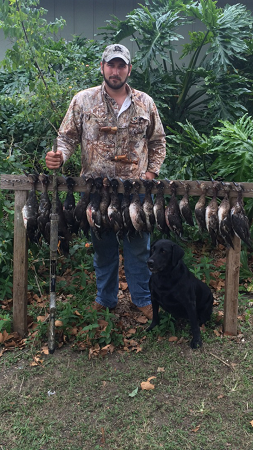 Jeff Guidry defines the word outdoorsman. He comes from a long line of life time hunters and was likely in the woods with his father before he could talk. Jeff and Tim have been very good friends for years by way of a "chance meeting" at a gas station in Louisiana, the two of them hit it off immediately, and when Tim began Rais~A~Ruckus Game Calls he knew Jeff would be a leader on his Pro Staff Hunt Team. Jeff has helped with ideas and product development from the beginning and proves to be a great asset to the team whenever he can be. He lives in southwestern Louisiana so that makes his presence at the company home state a little difficult but his heart is right here with us! Jeff and Tim look forward to years of working with each other.
Jeremy Bullington 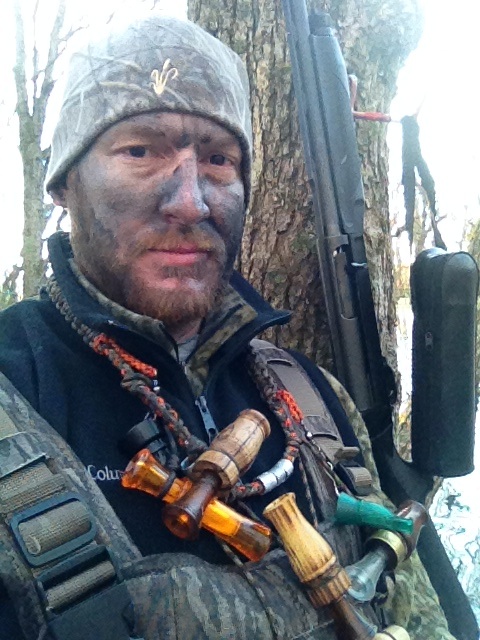 Jeremy displays an incredible ability to be great in the woods no matter what he is after. He originally came on as a prostaffer for ducks but has shown his abilities with the entire line of RAR calls has us all questioning, "What is his real calling?" Jeremy consistently kills very large deer, turkey and ducks with his collection of RAR calls. Although, he is best known for his uncanny ability with the wood duck calls! A few years back he had the incredible opportunity to sit for a long time in the flooded timber and mimic the hundreds of woodies swimming around him. This is what he credits his ability to "talk woodie" with. "They are one of the most social ducks and vocal ducks we have in America,"says Jeremy, "I just sat and listened and learned to make the sounds they were making all around me." Catch Jeremy's how to video on YouTube and linked to every wood duck call on this site.
Josh Beck 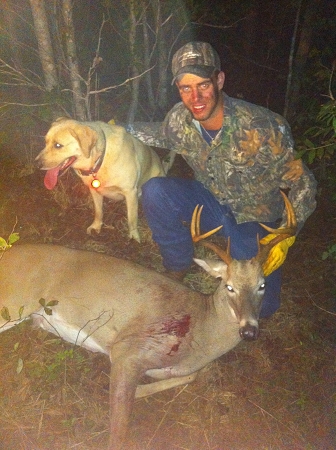 Josh started with Rais~A~Ruckus like a few other prostaff members, as a customer. His first purchase was a seal of fate for him and the company. Within days he called Tim and wanted another call for one of his buddies. It seemed like every other day Josh was selling another call to a co-worker or some contact of his and Tim finally saved his number in his phone as "Josh, the calling buying guy" just to recognize who he was. Tim invited him to join the Pro Staff Hunt Team in early 2014 and he has been going strong since. Josh is very savvy in the woods and good with his game calls. He hunts just about anything and everything but his preference is to be on the water somewhere trying to convince waterfowl to come home with him.
Clint Rutledge
Clint Rutledge was introduced to hunting and fishing at a young age. He started deer hunting with his dad pretty regularly at the age of 5, and at 7 he killed his first deer. He was hooked. Soon after that, he started to turkey hunt with his dad as well. At 8 he took his first bird; a jake with barely a 2 inch beard. That little gobbler sealed the deal, from then on it was hard to keep Clint out of the woods. Turkey hunting remains his favorite to this day, but he regularly hunts dove, rabbits, ducks, geese, and deer as well. Clint joined the Rais~A~Ruckus Pro~Staff in 2014 as a turkey pro staffer.
Hunter Garnto 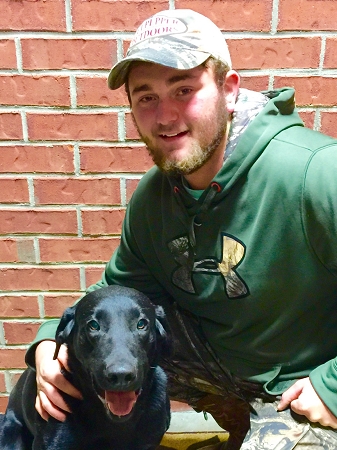 Hunter Garnto has been an avid hunter and outdoorsman since the age of 6. He started deer hunting with his father and finally took his first deer shortly after he turned 7. After shooting his first deer his love for hunting grew tremendously. Today, Hunter's passion is duck hunting. From being in the timber hole to being in a flooded field his love continues to grow for water fowling. He joined the Rais~A~Ruckus Pro Staff Hunt Team in 2014 as a duck hunting pro staffer. " I am very proud to be part of such a great pro staff team, I am really looking forward to years to come with the company!"

Justin Martin
I started hunting at a very young age with my dad with a youth model 20 gauge. My dad instilled in me a lot about the woods that I will never forget. I started hunting with a bow and after that first deer I never looked back. From deer to turkey to squirrels, there's nothing I won't go after with the old stick and string. I do a good bit of my hunting in the mountains of West Virginia in the fall which is where my roots began. Shootin' ducks and bow hunting doesn't get much better in my opinion, and I was thankful enough to marry into a family that loves hunting just as much as I do.
I look forward to Representing Rais~A~Ruckus Game Calls to the fullest!
Dylan Nappi 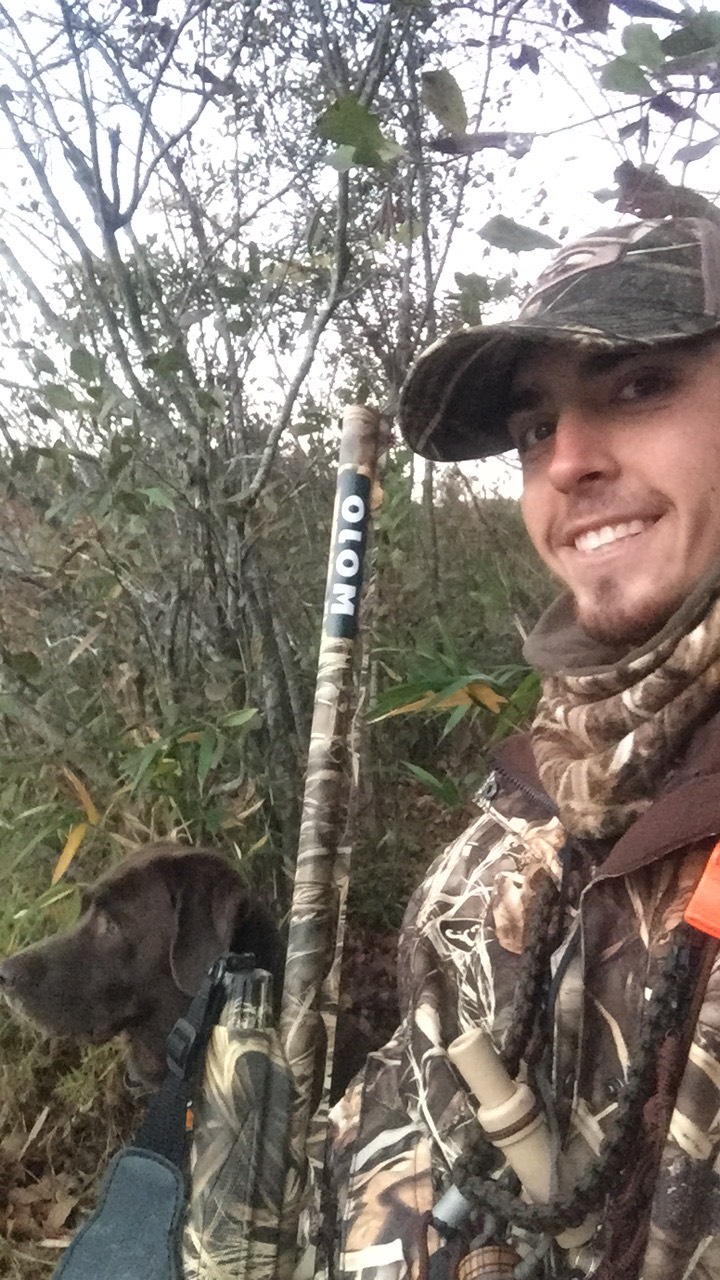 I have been hunting since I was 6, but I didnâ€™t start waterfowl hunting until I was 14. A few friends of mine got together and started hunting geese around the house and it has turned into a passion that I believe will never go away. I mostly hunt in Georgia and East Alabama but have started making a few trips to Bradford, AR during the late season. I met RAR back in 2014 at Duck Craze and have used their calls exclusively ever since.
Matt  Todd 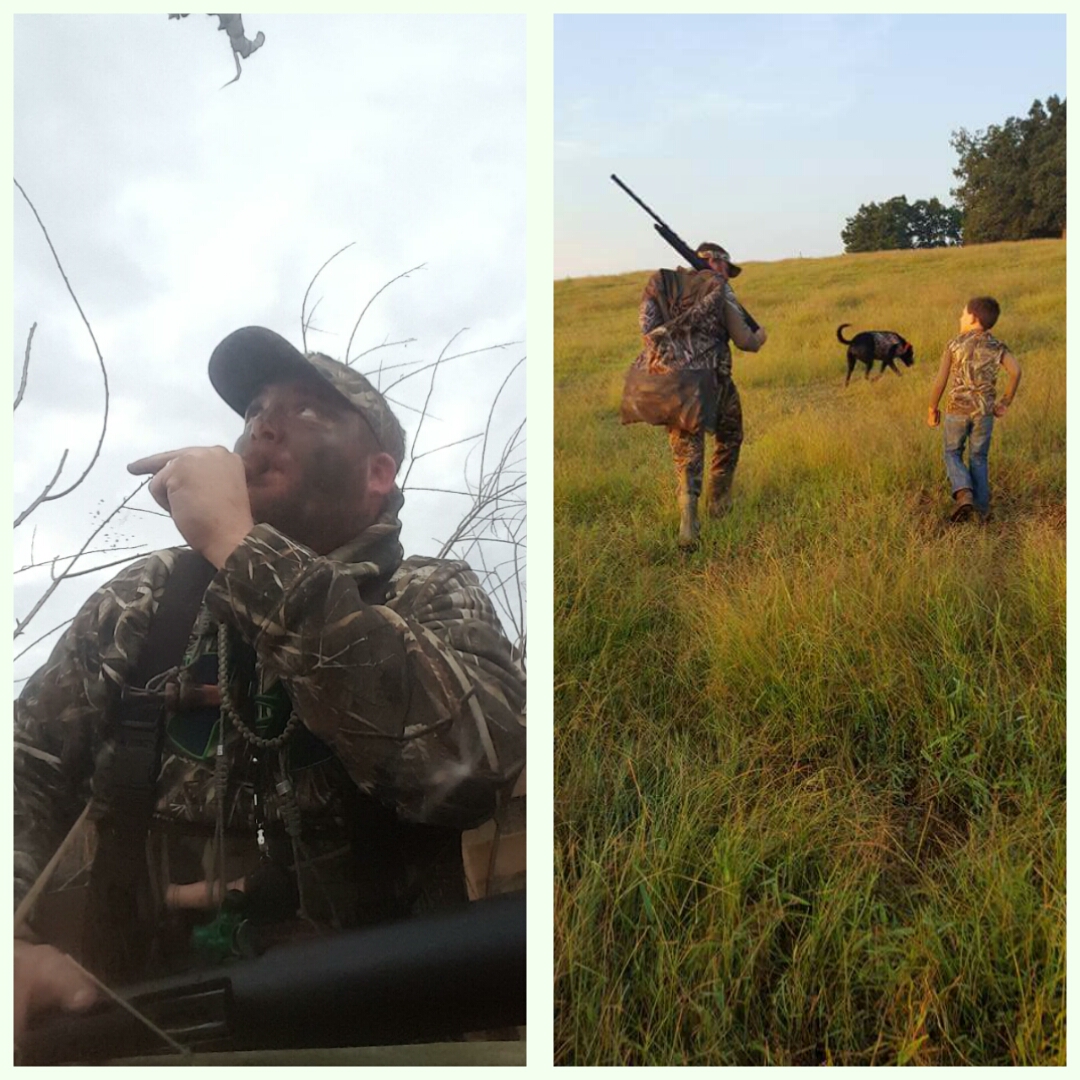 I started hunting at a young age and quickly developed a passion for it.  I remember being the little guy in the blind with a whistle hanging out with my mouth with my hero, my father and "the fellas" as he would call them.  But what I remember most of all is the life lessons I learned while sitting, listening to "the fellas".  They taught me how to pray and be a good person and that a woman is always right even when they aren't. They always made me feel like one of the guys. When I go places or take a group hunting I focus my attention on the kids as they are the future of this sport. If I can have an impact on one kid I will consider my job as a hunter complete. For me, it's not about how many ducks I killed or how big the game is I harvest,  it's about making memories that will last a life time.
Allen Ray
Allen Ray has been hunting since he was old enough to walk.  Although his dad showed him everything about hunting and the outdoors and he has a love for it all, over the years Allen developed a special love of duck hunting. "I met Tim at a festival and he and I hit it off immediately." Their common love for the outdoors and especially waterfowling was a great connection for them.  "Tim introduced me to the RAR line of calls and I was skeptical at first. I had always been a big fan of RNT but after blowing Tim's calls for a few minutes, I was sold on them."  It didn't take long before Tim realized with Allen's expertise in hunting as well as his love for the RAR line of calls, he would make a great asset to the Rais~A~Ruckus Pro~Staff  Hunt Team.  "I am pleased to be apart of the team, representing and selling game calls I believe in. I'm looking forward to the future with the RAR team!"
Austin Ray 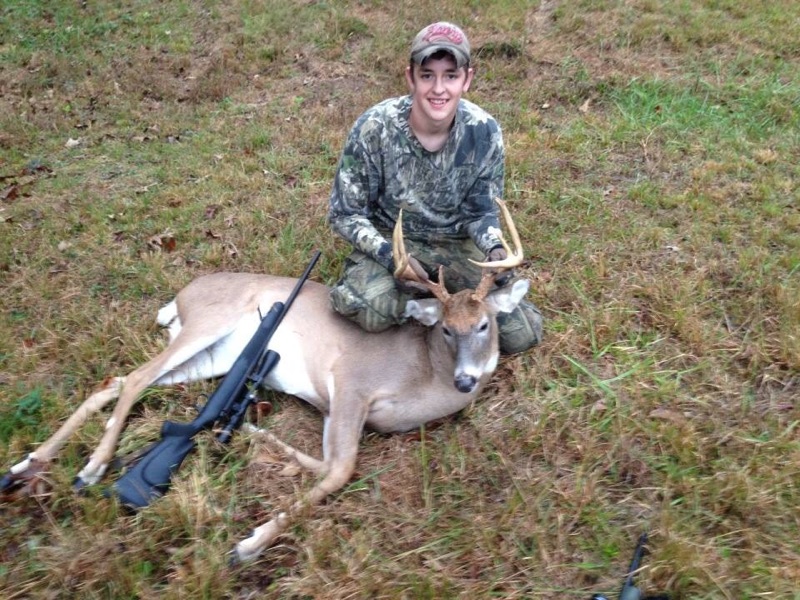 I have been hunting for as long as I can remember. My father and my grandfather took me every possible chance they had. I loved to deer hunt and turkey hunt with them. About 7 or 8 years ago, my dad took me duck hunting for the first time. I was hooked! Over the last few years I worked hard to be able to proficiently blow a duck call and when I met Tim at a local event I knew we shared some similar interests. I tried out a RAR call for the first time and knew right then and there I was going to be using his Calls from then on. They take so little air and sound so smooth, to put it plainly, they're awesome! I am looking forward to working on the Rais~A~Ruckus Pro~staff Team for years to come. Proud to be a part of the family!
Anderson Millsaps 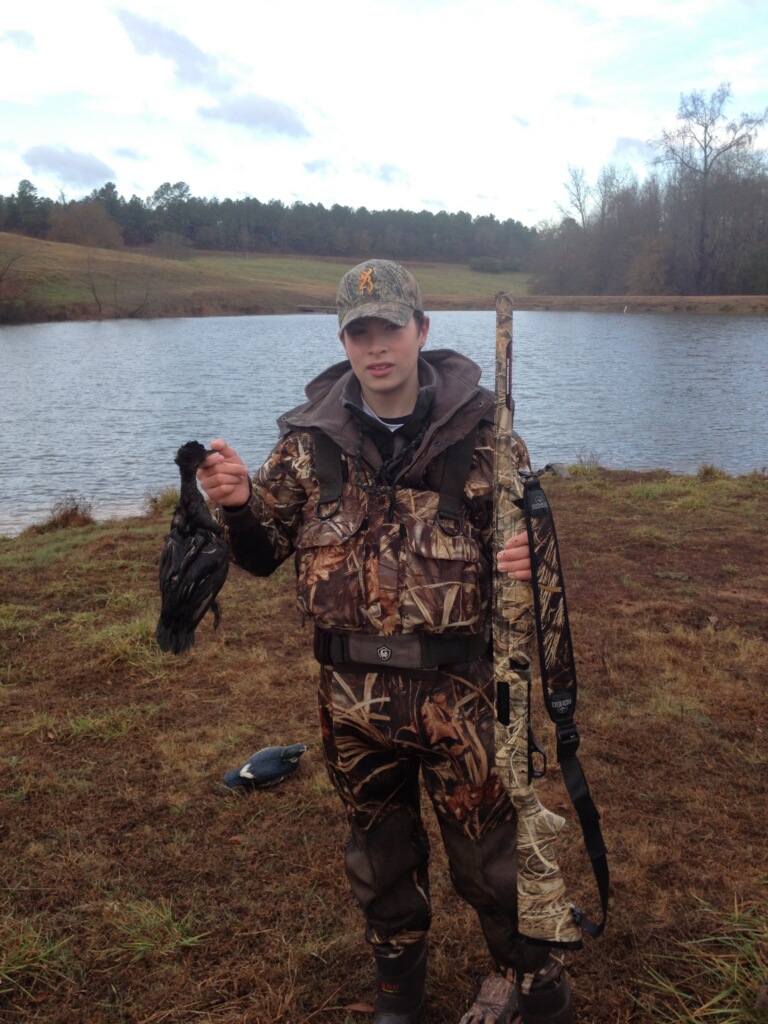 Anderson has been hunting since he was 13. He was introduced to duck hunting when he met the owner of the company, Tim Rupard, at a Sportsman's Dinner in Bethlehem. He went hunting on opening weekend with Tim and shot his first duck, and he was hooked. After his first successful duck season, and a lot of hard work selling calls all around his school, Tim accepted him as a Junior Pro staff member. Anderson has shown an incredible willingness to learn and to work hard to promote Rais~A~Ruckus and has been a great asset to the team.  He shot his first deer on the last day of deer season last year. Today he still hunts Deer, Geese, Ducks, Dove, and Turkey.
Walker Drummond
My name is Walker Drummond and I am from South Carolina. I stay involved in the woods with my father as well as my brother. Just about any type of hunting I do. You name it, I do it. From the time I could walk I was beside my dad hunting. I work at a sporting goods store where I can share my knowledge with customers who love the outdoors just as much as I do. The outdoors is my life and I wouldn't trade it for anything. Being a part of the RAIS~A~RUCKUS Junior Pro Staff Hunt Team is a big accomplishment for me. I look forward to this wonderful journey ahead. God Bless. -Walker
Junior Prostaff Members:
To be on the Junior Prostaff Hunt Team one would need to exhibit basically the same characteristics as above for the Senior Pro Staff Team, yet you are not expected to have quite the same expertise in your calling capabilities. With that said, however, these young men have outstanding skills and Tim loves to pour his experiences and life lessons into them, to help them along the way as they mature into men of the field.
Are you interested in becoming a prostaff or a junior (under 20 yrs old)  prostaff  member?  Call me, (770) 262 9962.
[email protected]
Copyright Rais~A~Ruckus Game Calls. All Rights Reserved. eCommerce Software by 3dcart.
TOP